Arjuna Vs Drona & it's relevance to the Budget Session of Parliament 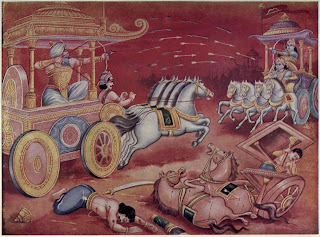 Respected Members of Parliament,
As you sit through the critically important budget session, let me extract a part from one of the world's greatest epics, The Mahabharata to underscore a point.
It was past mid-day on the 14th day of the Kurukshetra war. Arjuna had sworn to cut Jayadrath's head by the end of that day else kill himself. Cunning Duryodha seeing an opportunity to eliminate Arjuna, placed Jayadratha right at the back, with Karna in the center and Drona up ahead.
His strategy was simple. Only two of his generals could kill Arjuna, Drona and Karna. By putting both in Arjuna's path, either Drona or a fresh Karna facing a tired Arjuna (post a tough battle with Drona) would kill Arjuna. Even if they didn't, they would keep Arjuna engaged till sundown, thereby forcing Arjuna to keep his pledge and kill himself. The plan seemed to be working as Arjuna had just about reached Drona's position by mid-day. However, the All-knowing Krishna had seen through Duryodhana's plan. As Drona reached down to lift his bow and begin battle with Arjuna, Krishna whispered something to Arjuna. Drona looked up and was surprised to see an unarmed Arjuna get off his chariot and approach him on foot. Before he could collect his wits, Arjuna lay at his feet and said, "Dear Drona, you are my guru and my father. Today I have taken a pledge to kill Jayadrath and I seek your blessings and support to accomplish this." Drona was left with no other choice but to bless him and allow him the right of passage.
Similarly, Krishna brought forth Bheema to take on Karna in an epic battle, thereby diverting all the hurdles in Arjuna's path. Arjuna then in the nick of time severed Jayadrath's head, keeping his pledge, destroying the Kaurava army's morale, thus leading to its eventual defeat and destruction.
Why am I quoting this to you today? In the budget session, it is vital that policy matters with regards to economy and reforms are taken up, debated, amended (if needed) and passed. For this to happen, everyday the Parliament is in session, these matters must be given priority. However, the JNU issue has laid siege to the Parliament all of last week without a single critical bill being discussed or passed. The JNU issue is like Drona. It is important but not urgent and critical. You, honorable members must quickly find a way to circumvent it and immediately engage with the key matter of economic policy.Like Krishna we must know how to prioritize our battles and like Arjuna we must know which is the immediate enemy we need to tackle.
Posted by Unknown at 10:19 PM