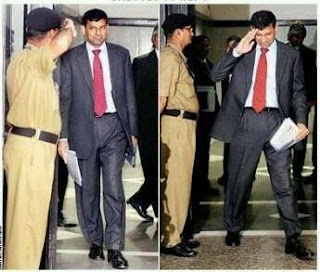 In 1985 India greeted Rajiv Gandhi with the same enthusiasm that Modi received 3 decades later. Both promised a clean, corruption-free and efficient governance. To effect this, both leaders brought in or supported honest and renowned technocrats to clean up the system.
But it's difficult for a leader to clean a system if he's fed on it to reach the top. The movie 'Guru' hinted at the undoing of Rajiv Gandhi. We all know how Rajiv Gandhi lost his aura, his hold on the people and eventually power.
The removal of Raghuram Rajan as the RBI governor is a sign that once again corruption is winning in India. Rajan's monetary policies may or may not be perfect we'll never know but his intent and action taken to weed out bloodsucking parasites who have mastered the art of bleeding money from the banking system was spot on.
In this honorable effort he clearly stepped on the toes of the powerful businesses backing the ruling party and its leaders. The silence from both the PM and the FM speaks out loud and clear.
India lost again.
Posted by Unknown at 3:10 AM No comments:

In its attempt to provide content for its members, Facebook spawned an entire industry of content creators and curators who flood our pages based on trends, news and interests.
This has had an opposite effect. It's made news feeds more predictable and uniform. Notice the similarity of topics being discussed also among the same set of friends.
It's killed the spontaneity and originality that once forced us to write original posts. Today all we do is share and like. Wait, even likes are defined by love laugh anger emoticons further reducing the effort of conversations and comments.
But in this effort to create an easier world on Facebook, it's ended up making it similar to the real one.
Something tells me that change is staring us in our faces. Something that will lure us with a bold idea and the excitement of creation and connection.
Posted by Unknown at 11:38 PM No comments: